(Around +24 years spent in time loop)

Zach is an Immensely powerful time looper, with massively enhanced mana reserve and reasonable control. He is raven-haired. He is a classmate of Zorian's. Zorian describes him as charming, confident and handsome. Zorian also says that Zach has never been mean or inconsiderate to him.

He is the only heir to Noble House Noveda, socially powerful, though his family was weakened by deaths. They fared poorly in the Splinter Wars because they underestimating fire arms and because they had a strong military tradition and a deep connection to the royal family that led many of them to conscript. The Weeping damaged them further resulting in only a single survivor (Zach) representing the whole house. He doesn't get along well with his guardian and sometimes beats him in fights at the start of loops for unknown reasons.

Zorian suspects someone has modified his memory and as such he is not a reliable source of aid to him earlier in the loops, but did accept Zach teaching Zorain the spells magic missile, flame thrower and shield.

It is later found out that someone has erased his memory of a particular student, Veyers.

Extremely skilled, but before the time loop he was a pretty crappy mage. Can cast 232 magic missiles without running out. Here is quote that sums it up.

Zach didn't even try to avoid the monsters, simply plowing through them like an angry god out for vengeance. At one point they were even attacked by a horde of skeletons and an enemy mage, but Zach simply made the earth beneath their feet open up and swallow them.

During one loop he even killed a powerful dragon. How he can have such huge reserves and still maintains shaping skills enough to spin a pen is unknown. He knows many combat spells and various other spells such as "create mud people". He also has extensive knowledge of alchemy and spell formula's, but only the parts that interest him. Some people suspect he has the Noveda bloodline, which would show up irregularly and erratically but which increase mana. His impossibly huge mana reserves are later confirmed to be a blessing given by the angels, as part of his contract with them. 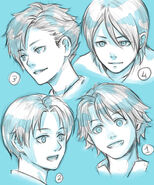 by hippothebrave on reddit
Add a photo to this gallery

Retrieved from "https://mother-of-learning.fandom.com/wiki/Zach_Noveda?oldid=5524"
Community content is available under CC-BY-SA unless otherwise noted.